Smt.Radhika Kalyani had her initial training in Bharatanatyam under Kalaimamani Smt.K.J.Sarasa , one of the foremost gurus in the Vazhuvoor style of Bharatanatyam. She had her training in nattuvangam and dance choreography under Padma Shri Chitra Visveswaran , a leading exponent of the Vazhuvoor style. Smt.Radhika also studied Kuchipudi under the world renowned Dr. Vempatti Chinna Satyam .Smt.Radhika has to her credit , more than four decades of performing experience . She has given innumerable stage performances in leading sabhas and cultural organisations both in India and abroad .

In 1976 she was selected as the best dancer by “Tamilnadu Eyal Isai Nataka Manram” under the talent promotion scheme . She had the unique opportunity to present four solo concerts funded by the government in different cities in Tamilnadu.

After her marriage to Dr.C.Rajasenan (an aerospace engineer) she moved to Europe . She not only performed but also trained students and conducted workshops in Germany and Netherlands.

On her return to India in 2002 , She started Sanchala School of Bharatanatyam where she imparts training in both practical and theoretical aspects of Bharatanatyam to about a hundred of students.

Her students perform regularly in all the major sabhas , cultural festivals like Chidambaram Natyanjali and Mamallapuram Dance Festival . They had the unique privilege of performing before the American Secretary of State Ms. Hillary Clinton on her visit to India in 2012 .Some of her students are graded artists in Doordharshan.

Radhika’s interest in nature and deep concern for the environment has led her to explore the waterways of Chennai.Her unique multimedia presentation “And quiet flows the River” involved over 50 dancers and is aimed at creating a social awareness of the state of pollution of the waterways in Chennai. This production has been staged several times in the city and has received much critical acclaim . Other productions to her credit are “Gopals gift “ , “Manjula mela” , “The Blue god” and “Songs of the poet king”.

On the occasion of the golden jubilee celebration of “Sarasalaya Institute of Bharatanatyam” ,Radhika was honoured with the title “Swayam Prakasha Narthaki” . In 2016 “The Mitra Foundation” an organization to promote art and culture felicitated her for her contribution to the field of Bharatanatyam.

Currently Radhika is working in collaboration with ABHAI (Association of Bharatanatyam Artists of India) and the AANMA JYOTHI TRUST to popularize Bharatanatyam in government schools. 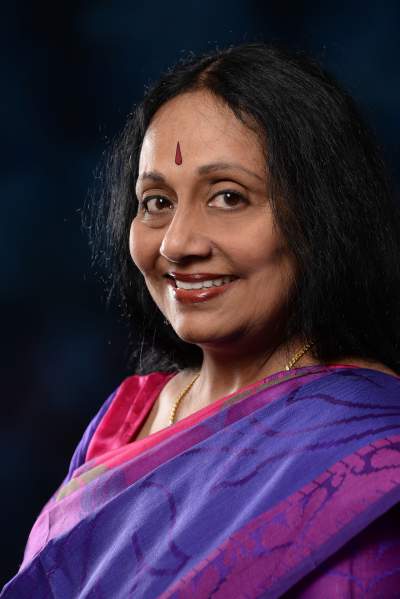